Recording the condition of a property

Quite often it is necessary and useful to have a detailed record of a property’s condition at a point in time. These are known as Schedules of Condition. They are used as a benchmark against which its condition can be assessed in the future and any changes identified.

A typical schedule of condition will record and assess the condition of each building element — walls, ceilings, floors, doors, windows etc. — and usually record this in a tabular format with columns describing the type and condition of each element. It is usually accompanied by photographs for later cross reference. 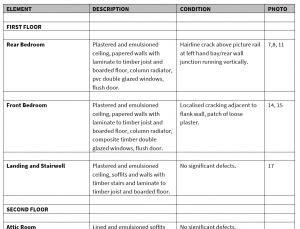 Most leases require the leaseholder to keep a building in repair. At the end of the lease the landlord will inspect the building and identify any repairs that they think ought to have been done but haven’t. They may list these in a schedule of dilapidations.

If there is no record of the building’s condition at the beginning of the lease, then the ability to negotiate any dilapidations claim is made more difficult. A detailed written and/or Photographic Schedule of Condition, taken at the outset, can limit a tenant’s liability to repair elements that were in poor condition when the building was occupied at the beginning of the lease.

Party wall awards usually include a record of condition, the purpose being to record a building’s condition before any work starts which can be checked in the event of any future dispute or allegation of damage. Sometimes a schedule is requested even where neighbours have consented to the works. In these cases, the schedule usually covers only those areas most likely to be affected by the neighbour’s building works, rather than the whole building.

Before starting building works some developers and clients take a schedule of buildings and structures likely to be affected by the works. Sometimes it is a requirement of the local authority, especially where works are carried out close to listed or distinctive buildings. Examples of this type of schedule that we have undertaken include houses within 200m of the HS1 high speed rail link during its construction, houses within 50m of a residential development site where heavy driven piling was planned, and an historic wall bounding a large leisure development.

Need a Schedule of Condition quickly? Get Your FREE Quote Today

A detailed schedule and record of condition of three buildings was required prior to construction of major sea defences.

Collier Stevens completed a detailed schedule of condition of three buildings, including a Martello Tower in an exposed location on the Suffolk coast. Major sea defences were to be constructed and Schedules were necessary to record the building condition before works started.

A schedule of condition was prepared of the flats above and below a unit in London where major structural building work was proposed.

A schedule of condition was prepared of the flats above and below a unit where major structural building work was proposed. Although the works were not subject to the party wall process, our clients were keen to ensure that an accurate record of condition was taken before they started their refurbishment. This could be used to consider liability for damage to neighbouring properties were it to occur.