Although much less used now than once textured coatings such as those manufactured by Artex remain on many ceilings throughout the UK. We have also seen when carrying out our property surveys similar products applied to walls and then emulsion painted. In fact it is estimated that around 8 million homes have an Artex finish somewhere. 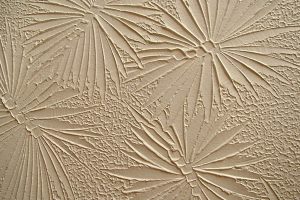 Until the early 1980s Artex type products contained very low volumes of asbestos, we usually advice clients that it may be present but needs no action but also advise them to take care when drilling or sanding this material. There has been some previous discussion and an article from the Daily Telegraph about six years ago gives a useful resume of the state of play at that time.

As it happens this is one of the areas where we get most queries after our clients receive their building surveys and one where there seems to be most confusion. The HSE says: “The asbestos fibres are held in place within the structure and are not easily given off and breathed in, however they are easily released if the coatings are sanded down – never do this.” So in essence if the product is stable and undamaged the risk to health is relatively minimal.

That said there is a genuine risk to health if the material is sanded or drilled and recently an inquest at Derby and South Derbyshire’s Coroner’s Court, heard how an operative was exposed to asbestos while creating textured ceilings during his work at a decorating firm between 1959-1980. The operative was found to have died of bronchial pneumonia brought about by asbestosis caused by exposure to asbestos dust arising from this work.

Most ordinary building surveys do not inspect specifically for asbestos and although we draw your attention to a risk we do not carry out any testing. For absolute confirmation that asbestos is present a small sample will need to be tested – there are various kits available for taking a sample and then sending it off for laboratory testing at a cost of about £40. A level 2 survey (homebuyer report) will not inspect for asbestos at all.

If you need to work on texture coatings you should first establish whether they contain asbestos (or positively assume they do if known to have been applied before 1980) and then follow specific guidance – generally the work does not need to be licenced but if in doubt check with your local HSE office.

The HSE has produced a series of guidance sheets under the heading “Working with textured coatings (TC) containing asbestos (non-licensed)” that can be downloaded from their website.

The information in this article is for guidance only. There is no substitute for advice specific to your situation. If this is an old post, the law may have changed since it was written.