When was the last time you checked your garden walls or if you are buying had a look to see what the walls are like? The cost of repair or replacement of brick and masonry garden walls can be considerable – the most recent wall reconstruction that we managed on behalf of a client cost over £10,000 for a 14m run of brick and block retaining wall on new footings and it wasn’t that high!  Sometimes the cost of repair can be shared with a neighbour if the garden wall is a party fence wall as described in the Party Wall etc Act. (See our Party Walls service)

According to government advice garden and boundary walls should be inspected from time to time to see if any repairs are  necessary.  They also note that garden and boundary walls are amongst the most common forms of masonry to suffer collapse, and they are unfortunately one of the commonest causes of death.  In some cases, damage such as leans or leaning piers may require walls to be rebuilt.

When we carry out a building survey we inspect the garden walls and quite often come across walls that are very misaligned and leaning often dangerously. Sometimes it is brick piers and parts of walls that are deteriorated rather than the wall itself bit all need prompt and potentially expensive attention.

Things to look for are:

Is the surface of the masonry flaking or eroded?

This often occurs as a result of freeze thaw action but in some cases the bricks become very damaged, if this is widespread then a wall can become unstable as its effective thickness is reduced.  Replacement of affected bricks or localised reconstruction may be necessary.

The pointing is the mortar joints between the brickwork, this can erode and fall away particularly if the original mix was poor and perhaps too sandy, if there are big or deep gaps then a wall may well be unstable and need attention.  Catch it early enough and it may just be repointing! Bank on about £40/square metre and make sure the old mortar is raked out to about 15mm depth. We recommend that climbing plants such as ivy are removed as these can damage both the pointing and the surface of the bricks as described above.  Old walls may need to be repointed in a lime mortar rather than a sand / cement mortar.  This can be more expensive.

Is the wall leaning?

Walls lean for a variety of reasons. Typically tree roots can grow and cause heave and put pressure on wall or footings, or damage can occur to the foundations in the same way that subsidence affects a building. If a wall is “retaining”, that is it holds back ground, then it should incorporate weep holes to allow water pressure behind to be relieved.

I was once told that the only truly stable wall is one that is flat on the floor, but in reality, if your wall leans to around about 50% of its width, then it may need attention. So, for example, if a single brick wall – approx 230mm – is out of square by 100mm between top and bottom it may need attention. If in doubt, ask a chartered building surveyor like us, or similar professional, because a garden wall collapsing onto a pavement can be very dangerous. 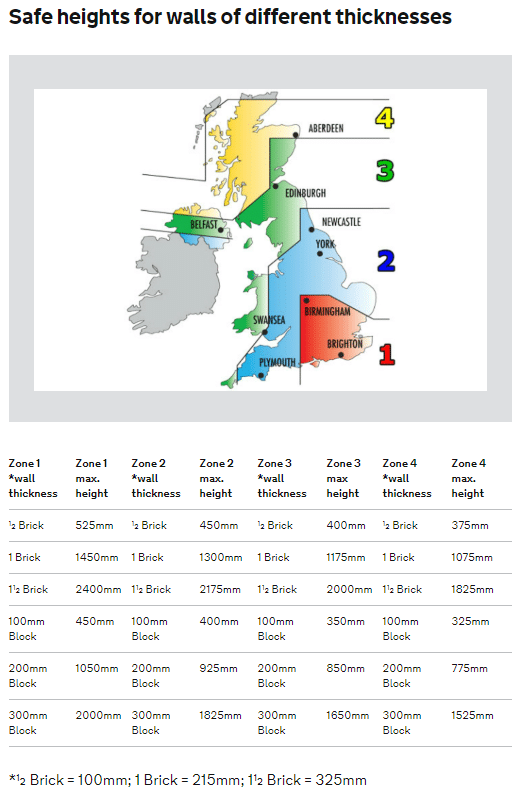 If you used to play with Lego as a child you will remember that very tall thin structures always fell over. Well, the same is true of real walls. Care needs to be taken to ensure that wall is not built too high for its width.

The ratio of height to width varies around the country and can vary according to prevailing weather conditions and variable ground conditions. However, as a guide, in the south east a brick wall 230mm wide (“one brick thick”) can usually be safely built to a height of 1450mm [about 3’6”, so not  very high]. A wall 325mm wide (“one and a half brick thick”) can go up to about 2400mm.

Different materials will vary and it may be possible to introduce forms of reinforcement that can improve these performances. All walls should have adequate footings properly designed for their situation – the temptation to just dig a shallow trench slop in some concrete and build a wall must be avoided!

Is the finish on top of the wall firmly attached?

The top of a wall is usually finished with brick on edge copings or concrete copings and these may have become loose. They can be tested quite easily by hand. We recommend finishing walls with a harder engineering brick on edge, or specialist copings, as these protect the head of the wall from premature failure.

Are there any cracks in the wall?

What we describe as hairline cracks (0-2mm across) are very common in all sorts of walls and may not indicate serious problems. Very often they are due to thermal movements within that structure. Sometimes these fractures become bigger – usually it is good practice to build into walls a movement joint – the spacings vary but typically every six metres or so. These special joints allow for some movement to occur in the wall without causing cracking. It is important that you find out why the cracks are there, rather than just covering them up, because aesthetic repair does not resolve underlying structural problems that may cause failure.

If in doubt seek professional advice. Although the repair of walls can be expensive, if they were to fall and injure someone (or worse), or cause an accident, the potential costs can be staggering!  Insurers may well review their cover if a wall has not been properly or adequately maintained. If you are buying a house, make sure your surveyor checks the boundary walls and that your solicitor checks who is responsible for repairing them. Do not be frightened to negotiate the price if the walls need rebuilding.

The Party Wall Act contains provisions for shared repairing costs where the wall is shared or described as a “party fence wall”.  You may need to consult a specialist party wall surveyor (like us) in this regard, particularly if you are having difficulty in agreeing how to share the costs with your neighbour.

The three pictures below illustrate some of the walls we’ve found or repaired:

If you have concerns about a wall on your property, get in touch for expert party wall advice or to request a single defect report