Do surveyors inspect the loft? It’s a question we are often asked and yes, we do for both building surveys and homebuyer reports. But, what are we looking for in a loft survey and what should you expect to see? This post is primarily relevant to older buildings – say late Victorian to mid-60s – earlier than this and all sorts of interesting timbers are often added and after this roofs are very often of prefabricated timber trusses. (Oh, and a quick rear end cover – this is not, and nor is it intended to be, comprehensive).  First and foremost all of the timbers that were in the roof originally were designed to transfer loads or do something, taking any of them out will weaken the roof structure.

The first thing we look for is a good sized loft hatch allowing access into the roof space or roof spaces. Sometimes that means that two hatches are required if there is a rear addition roof. A small head and shoulders hatch will do, but is a challenge for the ample surveyor. Hatches also allow loft access for maintenance not just inspection.

A check of the hatch needs to be made to make sure that it is properly trimmed – it’s no good just to cut a hole through roof timbers and hope for the best, any cut through a joist should be trimmed with at least one and ideally a pair of similar trimmers transferring load to adjacent joists.

If there is a loft ladder it should be properly installed, have working safety catches and importantly be the right length – you would be surprised at the number of ladders we see that are too short and consequently are too steep.  Always open the hatch carefully – every surveyor has been bashed on the head by a loft ladder falling out of the hatch and don’t assume its sound – most of us have also had one collapse beneath us.

If there’s no light then it would be good to provide one or to put a light on an extension lead. So with a hatch, a ladder and a light we can start to look at the roof structure. Before that we will turn the light off and have a good look around – is daylight getting in? Are there any holes? 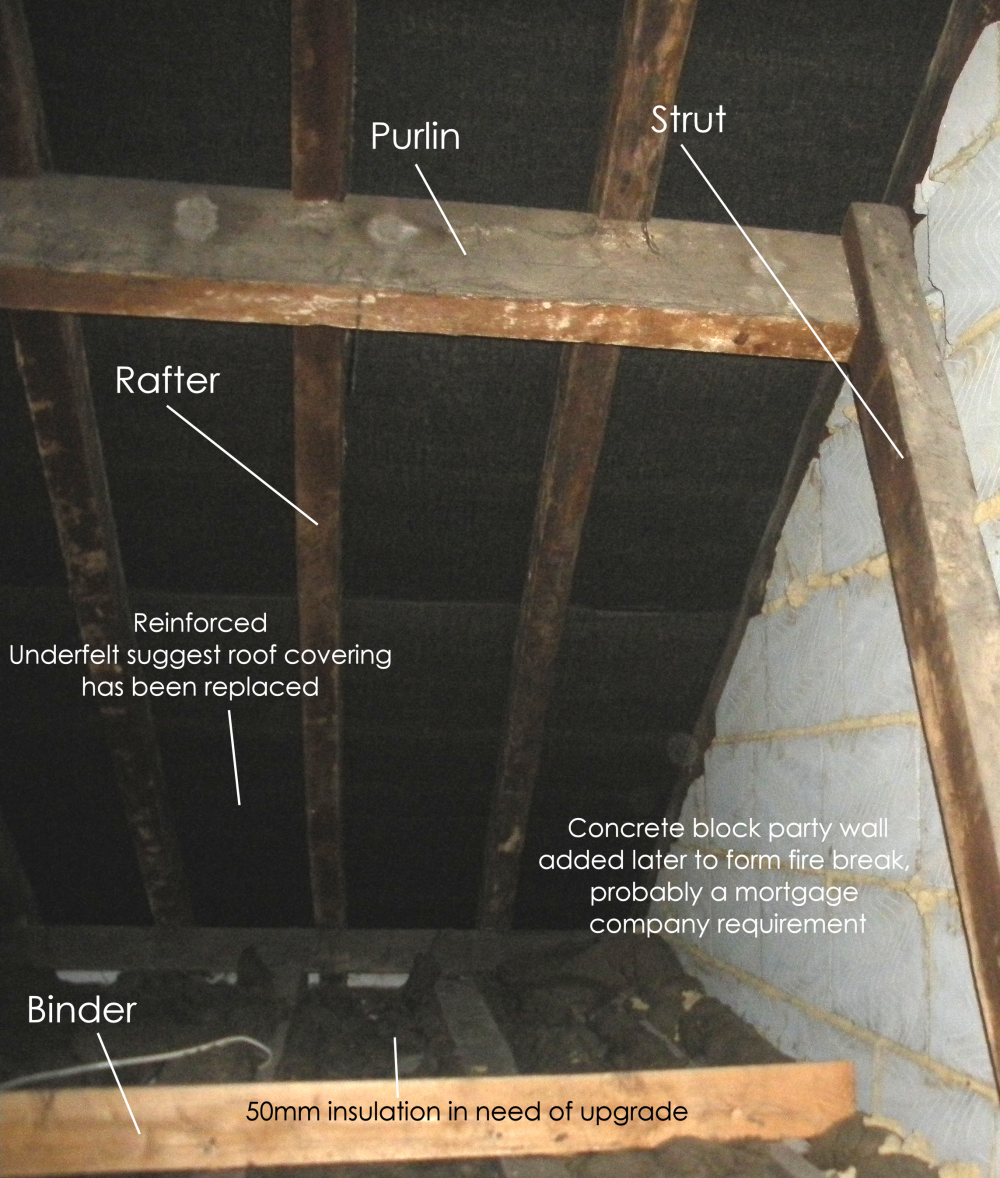 We expect to see rafters (they’re the sloping ones) and joists (the flat ones usually supporting the ceilings below).  About halfway up the slope there will almost certainly be purlins running perpendicular to the rafters and bearing on the outer or party walls. The purlins will usually have a one or two of struts supporting them and transferring loads to the partitions below. Quite often there will be collars or horizontal ties between the rafters to triangulate the structure like a capital “A”.

Roof spread and bowing timbers can be indicative of overloading so a check needs to be made to confirm whether the roof covering has been changed – concrete tiles are very much heavier than slate for instance. If there has been a change in covering extra strengthening timbers may be needed – possibly extra struts and collars. One way of telling would be the under felt, older houses with original roofs won’t have any, older re-roofs are most likely to have a black bitumen based felt and more modern replacements are of reinforced plastic or a breathable membrane. Roof coverings have a variable life span but typically 70 to 90 years is about the maximum.

If slates or tiles have been replaced we will consider the need for extra strengthening, or, if additional strengthening has been provided consider its suitability. For complex roofs we may suggest consulting a structural engineer.

While we look at the timbers we need to inspect the joints and make sure they’re holding together and well detailed – not simply roughly nailed together. At the same time we’ll keep an eye out for woodworm holes and any decay – more often than not wormholes go way back and are not current – we’ll check for the distinctive frass which can indicate recent activity. It’s worth noting that many roofs have had ‘precautionary’ timber treatment over the last 40 years – more often than not several times as buyers get it done just in case because the mortgage valuation told them to!

So assuming the timbers are OK then there are the other bits and pieces – is the roof insulated, if so by how much? These days we’re looking for at least 250mm between and over the joists. If it’s only 100mm or so then it should be upgraded. Older insulation such as wood shavings should be removed as should homemade solutions such as shredded newspaper and quite often carpets laid over the joists. The back of the loft hatch should be insulated too.  Insulation products that are old and look like wool should be approached with caution – it might be asbestos, polystyrene granules and vermiculite may be flammable. All should be removed.

What condition is the party wall in? If there isn’t one then one will need to be built to ensure there is fire separation between the houses, any holes in the party wall should also be infilled. What about the gable wall – if it isn’t tied to the roof structure it may not be stable or plumb.  What about chimney breasts – are they there, are the timbers around these decayed and the masonry damp indicating a flashing failure externally? We’ll have a look to see if there is any cross ventilation to mitigate condensation risk.

What we don’t want to see when we carry out a loft survey is missing timbers, odd bits of time nailed in strange places, bows in the timber, splits, no insulation, loose boards randomly laid over joists, polythene, cardboard, hardboard or even old carpet nailed or stapled to the underside of the rafters.

You could of course use the above guide to check the roof yourself, or alternatively you could employ an experienced and competent surveyor to do it for you!

Need some quick advice? Call us or complete the quick enquiry form below – pop your phone number in if you want a call back.