And if you do, or most likely will have at some point, who is responsible for fixing it if the wall divides two properties?

Who owns the wall?

It’s the age-old question – which neighbour owns which garden wall or fence? The owner to the left, or right? Facing East or facing West? There are so many conflicting versions of this. Well, it’s a myth.

There’s no rule, but you shouldn’t guess. In a perfect world, your title deeds will state who owns which boundary and there might be a “T” mark on the title plan but more often than not there’s nothing. In which case, some digging may be needed to get back to the original conveyance which may have some information, or some plain old measuring may reveal whose land the wall is on.

The party wall act contains provisions for shared repairing costs where the wall is shared or described as a “party fence wall”. That is, the wall is built directly down the boundary line with part of it on both pieces of land. If the wall is wholly in your property, then it is your responsibility. Likewise, if wholly in the neighbour’s property, then it is theirs. You may need to consult a specialist party wall surveyor in this regard, particularly if you are having difficulty in agreeing how to share the costs with your neighbour.

It’s vital you keep an eye on your garden walls. Like any brickwork open to the elements it will suffer wear and tear. You often see walls leaning to the side – especially if there’s an overgrown garden at the back of it. Garden and boundary walls are amongst the most common forms of masonry to suffer collapse, something to bear in mind if a footpath runs alongside it and there’s a public right of way. If it’s your wall and falls and hurts someone you could be liable. Here’s an example of a wall that’s not been maintained: 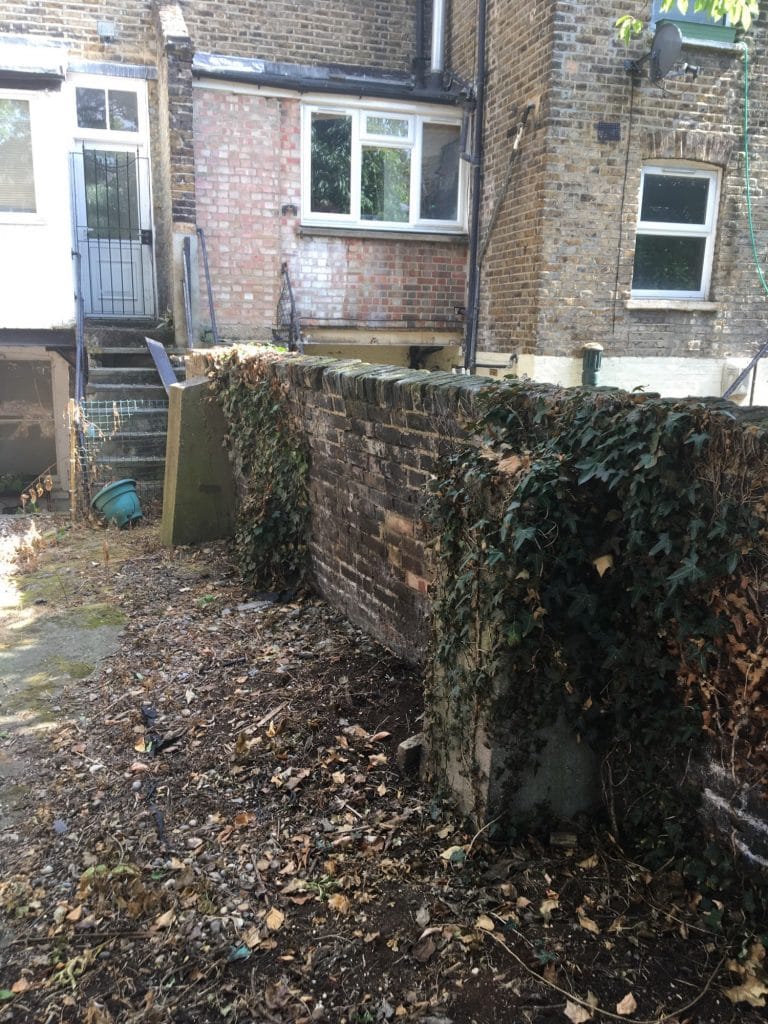 Ivy growth should be cut back and you should inspect the mortar for deterioration. Garden walls can need repointing just like house walls. If it’s leaning you should be concerned, the rule of thumb is that if the distortion is greater than 1/6 of the walls thickness then investigation work may be required. For instance if the wall is 230mm thick then any misalignment greater than 40mm in its height would be a cause for concern. Remember your wall may be out of plumb, but hidden under plant growth. If you are concerned you should consult a surveyor or structural engineer.

When we carry out a building survey we inspect the garden walls and quite often come across walls that are very misaligned and leaning often dangerously. Sometimes it is brick piers and parts of walls that are deteriorated, rather than the wall itself, but all need prompt and potentially expensive attention. But remember in most cases we can only look at the wall from one side during an inspection.

If you’re concerned about your own wall, seek professional advice. Although repairing a damaged wall might be expensive, if it falls and injures someone, or worse, the potential costs, not just financial, would be untold. Your insurer may well review their cover if a wall has not been properly or adequately maintained.

If you are buying a house make sure your surveyor checks the boundary walls and that your solicitor checks who is responsible for repairing them. Don’t be frightened to negotiate in price if the walls need rebuilding.

If I do need to carry our repairs on a garden wall, do I need a party wall agreement?

Well, if you’ve had discussions over who owns the wall and decided it’s shared you will need to follow the party wall act and serve a notice and possibly have party wall agreement known as an award. This can be useful if costs are to be shared because surveyors will agree the costs and the proportion each party is to pay. It is a legally enforceable document so if your neighbour later decides not to pay, it can be used to take action.

If however, the wall belongs solely to you as a boundary wall, then the Act does not apply and you won’t be able to have a party wall agreement.

What if damage to a wall was caused by the neighbour?

If your neighbour’s garden plants or trees have caused the damage to the wall in the first place, they are most likely to be liable for the repairs, but of course you are responsible for maintaining the wall in good condition if it is owned by you, and you are jointly responsible if it is a party fence wall, so it might be that costs end up being shared.

If it’s a party fence wall, the party wall act can assist in determining liabilities and agreeing costs.

At Collier Stevens, we’re party wall specialists and also act as experts in disputes such as this. If you think you have a party fence wall problem why not call us and discuss how the Party Wall Act might be able to help.