In our last blog we saw how intriguing it can be to view maps, both old and new, to see what sort of land your home might have been built on, if it had suffered bomb damage during the war, particularly in London, or just to see how things had developed over time. We focused on a survey we did at Springbank Road in Hither Green, London SE13.

But there is much more that can be researched to get a real insight into the history of your home and the stories it might hold. From old photos, to formal land registry and local authority records, to the local historian, there’s a wealth of information.

We’ve avoided the information that can be sourced from local libraries and local history rooms, but if you are really digging into the history of a house you will, in all probability, end up there to tie together all the loose ends. For this article, we have concentrated on Hythe in Kent, but similar information can be tracked down for most towns.

There are some great photo and image archives online. Almost all of these have a search function so you can input your address and get some great results.

Historic England has some great aerial photographs. They even offer a free search service if you want to request aerial images of a specific place. We found this photograph of Hythe.

If you are looking specifically for houses in London, we’d recommend checking out a photo section on the City of London website. This is an extraordinary archive of 250,000 historic images of London. A simple search for Chislehurst shows up 92 old photos, many of houses.

The Imperial War Museum has an impressive database of images, as do many local history and special interest groups. A search for Hythe on this site garners some great images, such as this one of a second world war military exercise on St Leonards Road. Most of these houses are still standing.

The latter are useful after some basic research has been done and local landmarks identified. For instance, images of lost railway stations or lost pubs can often contain images of neighbouring property. For Hythe, try ‘Disused Stations’ for images of the (now long gone) station and maps.

The Francis Frith Collection has a wide selection of images for purchase.

And many towns have a local history Facebook page which can be worth checking. There are some great old photos of Hythe on the “Past Present Future” Facebook group.

Postcards can be harder to locate online, but we have had success using eBay. It sounds odd, but a decent search can often turn up local postcards for sale along with a scanned image that can be inspected. This one is of Red Lion Square in Hythe around 1910. 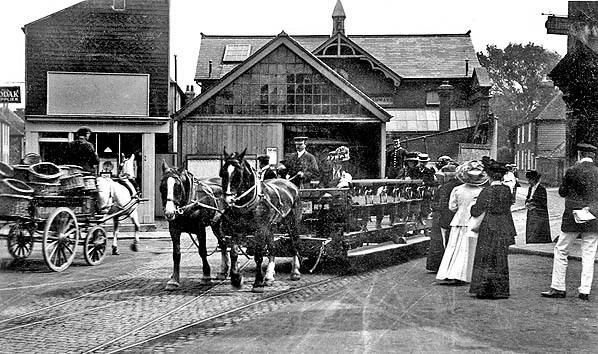 And, of course a plain old Google image search can yield many results for photos and images of old postcards. I made the fatal mistake of doing this for a friend’s house whilst writing this blog and ended up spending 20 minutes looking at photos the estate agent had uploaded. They showed just how much work had been done over the last few years since buying. Below are some before and after pictures of their kitchen and garden.

It just goes to show what a historical image can yield even after a short period of time. For example, an old image of a living room can tell you whether a flu or chimney breast has been removed.

Often used for viewing and commenting on new and recent planning applications, many local authorities have a search feature that goes back decades. Usually the plans and documents are not available, but interesting information can be gleaned from the application itself. You can see, along with the approximate dates, whether there has been changes of house name, sub-division of grounds, whether extensions have been added, and what alterations and reconstructions have been made. It’s all good background information on your home – or a new home you might be buying.

The Land Registry website is a great source of historical information on your home. You can learn a lot from the detail in a property’s title deeds when viewed alongside the title plans, especially if these are of some age. Title deeds and plans for any property can be downloaded for a small charge (currently £3 per plan and £3 per copy title deed). These can show boundary changes, dates of land transfer and sometimes wider estate detail where a property forms, or once formed, part of an estate of similar units.

If your house is a listed building, you will find a wealth of information on the British Listed Buildings website . On this site, as well as reading the official listing data for each building, you can view the location on a map and, where possible, see it in Google or Bing Maps. You can view comments and photos submitted by other users of the site and also add your own information.

Local historians and keen residents are a great source of historical information. These enthusiasts will more often than not have already done much of the legwork and pulled together information from several sources. More commonly, they will know about particular streets and areas rather than specific property, but nonetheless they’re a good jumping off point for drilling down to further information.

More help finding out the history of your home

If our blogs haven’t been enough, and you are eager to learn more, check out the useful websites listed below: