Last winter (2019/20) saw some terrible rainfall and flooding across the UK.

Along the coast in Folkestone and Hythe (near to our Kent office), we had some fairly high tides too. It’s eight years since I wrote the original version of this article about Hythe and the risk of flooding in the area, so I thought it was probably about time it was updated.

Without wishing to underestimate the heartache and damage that comes with flooding, a 2012 report by the Association of British Insurers highlighted the risk of flooding in Folkestone and Hythe and was seized upon by the popular media. It was made to sound as though local residents should be equipping themselves with waders and taking scuba lessons.

What the report says is:

…“The worrying scale of the flood risk faced by communities in political constituencies across England and Wales is revealed today, 31 January 2012 by the ABI. Boston and Skegness in Lincolnshire is the constituency with the most homes at significant risk of flooding followed by the Vale of Clwyd, Folkestone and Hythe, then Windsor. In 92 constituencies there are 1000 or more homes at high flood risk.

The ABI has analysed the latest Environment Agency flood data against the 573 parliamentary constituencies in England and Wales. This shows that, despite Government pledges to tackle the rising flood threat, thousands of homes and businesses remain at significant flood risk. Significant flood risk is defined as a greater than 1 in 75 chance of flood in any given year.”

You can read the full report here: From Aberconwy to York, Boston to Windsor – ABI highlights the serious flood risk facing communities in England and Wales.

Those of us who do business in Hythe are used to be being in the top five of all sorts of lists – number four in ‘Crap Towns’ and now we’re number three in the flood risk league, but we think that Hythe as a town we should be much further down the flooding list because the ABI report makes an overall assessment of the whole of the local authority area – not just Hythe.

Delving a little deeper, shows that Hythe is not quite in as much trouble as the headlines would have you believe.

The geography of Hythe and local flood risk

Those of us who live and work in Hythe know that quite a lot of it (more than half the town) is built on, or at the top of, a great big hill. Our coastal area has sea defences and hasn’t actually flooded since October 1999 (before the defences were built) when some water breached the (then) sea wall and ran into St Leonards Road, Albert Road, Victoria Road etc.

The Royal Military Canal which runs through Hythe last flooded on the outskirts of Hythe in 2002 (where only a few properties suffered internal flooding) when high tide levels and significant rainfall meant the outfall gates to the sea could not be opened at Seabrook. We’ve seen instances of this over this Winter too, though to my knowledge no properties were flooded because of this. In the town centre, the canal is built in a fairly deep trough with grassy banks in the town centre area so for that to breach there would be a very significant event indeed.

Details of recent flood events are in the Folkestone and Hythe District Council flood risk report 2015.
You can find out how much your local area is a risk of flooding on the Government website: Flood Warning Information Service. We typed in a Hythe post code and found the very scary looking Hythe map below: 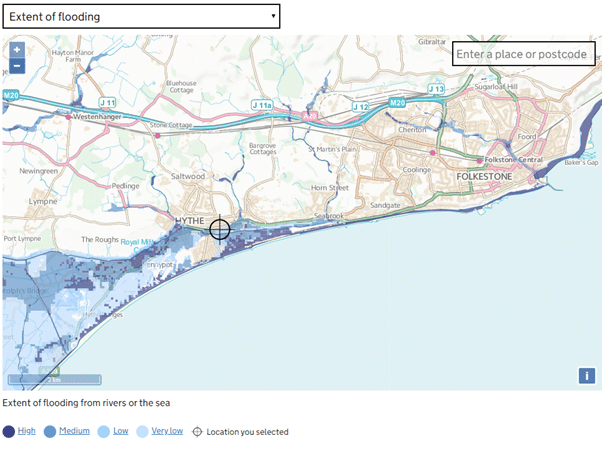 Although the image looks frightening, a large portion of this image is actually at very low risk.

The risk levels described above all ‘take into account the effect of any flood defences in the area. These defences reduce but do not completely stop the chance of flooding as they can be over-topped or fail.’

I believe Hythe is pretty much in the clear for now with, at a guess, about 5% of the houses in Hythe being affected, and all of those are in the obvious area – the flat coastal part. So that’ll be a 95% chance of NOT being at risk – pretty good odds. The map also shows that substantial areas of Hythe are in fact not identified as being at risk at all. For instance, the Stade Street end of Windmill Street is in the flood zone, but the St Leonards end isn’t – so off to the Three Mariners in case of a flood then!

I should make a disclaimer here, that in my professional capacity as a RICS Chartered Surveyor I would never suggest that a home would NEVER flood in Hythe. It is simply my opinion as an individual that I would be very surprised if there was high level flooding in Hythe, unless there was an exceptional weather event or natural disaster.

The 2012 report says that 7,196 homes are at risk in Folkestone and Hythe parliamentary constituency – well a check of the constituency map shows that this extends right down to Lydd and Dungeness and pretty equivalent to Folkestone & Hythe District Council’s area.

The best figure I could get at that time was that there are 47,500 homes in Shepway so that means that about 14% are at risk, and another look at that environment agency map shows that a disproportionate number – perhaps at least half of the affected homes must be out on Romney Marsh.

The report also suggests that limited sea defence work has been done, well, that too is not quite right as the KCC Flood Risk Management in Kent 2007 report confirms that £12m has been spent in Folkestone and Hythe since 2000.

Since my original article was written in 2012, there’s no doubt we have seen some rapid growth in numbers, including right by the sea at Moncrieff Gardens and Fisherman’s Beach, so I thought I should also consider it in this article, especially considering a recent news report I found that showed the areas in Kent where property developments were most at risk from flooding. Lo and behold, Hythe and Folkestone were top of the list. According to the article, “Between 2015 and 2018, the most recent figures available, 36% of the new addresses in Folkestone and Hythe were in National Flood Zone 3”, the highest risk category.

So what should you do if you live in Hythe, or want to move here?

Overall, we don’t think you should panic right now. If you live in Hythe, or you’re thinking of buying in Hythe, bear it in mind, but don’t let it put you off. What is important is that you have the right home insurance, and you don’t pay more for it than you need to. You should make sure that you talk to insurers at a total postcode level to avoid the blanket “Hythe is a flood risk so we won’t cover you” type of response. If insurers try and avoid cover, go to an experienced local broker (we suggest Blueshield Insurance in Prospect Road).

You can also take a look at FloodRe a scheme developed to support people living in flood risk areas.

Of course if you need a building survey in Hythe we would be delighted to help. Call 01303 239000 or get a free no obligation quote online.