Take this seemingly innocuous rainwater pipe seen on a survey for instance. 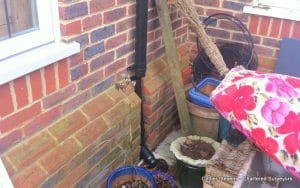 It’s in the rear corner of a fairly new house. The garden stuff has been piled up against it a bit, but otherwise it is probably walked past 10 times a week by the homeowners who look at it and think “I must fix that at the weekend”. I was surveying this house for a prospective purchaser, sometimes the repair is simple its quicker to do it than write about it (unless it has caused a problem) so in this case when I saw it I fixed it in approximately 7 seconds (not, of course that we do building work or that the repair was done with any liability, etc). Ideally a small screw through the joint would secure it against slippage in the future.

So the fault is fixed, but the damage is done. All those times the owners walked by and missed opportunities have resulted in a damp problem. It’s probably been like it for months because, low and behold, the wall internally is damp where the outer leaf has become soaked from rainwater, and the cavity is bridged by poor construction, insulation and mortar snots/droppings. That seven-second repair that could have been done last September is now an epic – internally the kitchen units have to come out to get to the affected area, the wall has to be repaired, etc.

So the moral of the story? Got a small, tiny job on your house that needs doing? Don’t put it off, all you are doing is setting yourself up for future expenses and, if you’re selling, a problematic surveyors report.

Collier Stevens provide building surveys and homebuyer reports across London and Kent – if you need some help please get in touch.