As surveyors providing expert witness advice in housing disrepair cases, we are often asked to advise on condensation issues. 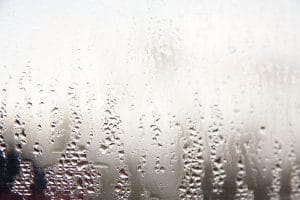 We recently helped a client who was having problems with a tenant complaining of condensation with damp walls and mould growth. Our client, the landlord, thought this was unusual as his previous tenants had not complained and there was no sign of condensation when the previous tenants moved out and the new ones moved in. He asked us to investigate and recommend solutions.

Condensation occurs when air becomes saturated and condenses on cold surfaces whose temperature is less than ‘dew point’. The dew point temperature varies as the saturation of the air, ie, the relative humidity (RH), changes and the air temperature changes. You can see examples of this when steam comes out of a kettle and condenses on the wall, or when a can is removed from the fridge and water begins to run down its sides.

When we investigate condensation problems, we take specific measurements (the relative humidity, the air temperature) using our portable environment meters to calculate the dew point. The results of these help us to inform what can be done to prevent the build-up of condensation, as this case study shows.

We arrived at the property in mid-afternoon and were shown condensation in the bathroom. The walls were damp to touch. The bathroom had not been used since the morning, however, there were clothes drying on an airer and the window was closed. We began our investigation by using our portable environment meters to take the RH (saturation level) and air temperature, and calculated the dew point.

Here are the readings we took:

The bathroom had an extract fan, but this had been switched off because it was too noisy at night. We suggested opening the window and set the small top opening window slightly ajar on its security setting. We left it for 30 minutes before taking new readings:

We recommended that the extract fan was reconnected and that the window was left ajar after the bathroom had been used for a shower or bath.

Getting a fuller picture

So, what about the rest of the property? We left a small recording environmental meter on site for three weeks to record RH and air temperature every five minutes. This would provide a full picture of the environmental conditions in the flat. Here’s an extract of the data. Every red entry shows conditions that cause condensation to develop.

There were several distinct features in the data set, including a pattern of condensation occurring between 1 and 5 in the afternoon, high RH levels and low air temperatures.

A typical comfortable air temperature is around 18-19deg, and here the average was 15.5deg.

This gives an average dew point of 13.5deg. In other words, condensation will develop on any surface with a temperature less than this. We knew that all temperatures could be less than this from our visit and the bathroom assessment.

To prevent condensation, dew point needed to be reduced, ideally to less than 10deg. We recommended that the most effective solution would be to reduce the RH by improving ventilation, unblocking air vents, and leaving the window slightly ajar.

We also advised making sure that the bathroom and kitchen extract fans were checked, cleaned and used. By reducing the RH to 70% we lowered the dew point to 10.1deg, well below the usual surface temperatures, resolving the dispute between the landlord and his tenants.

Do you need our help?

Have you got problems with condensation and need a surveyors report? Do you have a complaint against your landlord, or is your tenant complaining? Collier Stevens has specialist knowledge. Call now, make a detailed enquiry online or for a quick call back send your details here –